Singing in the Rain is known as one of the best musical films of all time. A love story set in the emergence of sound films in Hollywood, which shows all the formal elegance and aesthetics characteristic of the 1920s. A musical comedy full of movie buff winks, humor and sensitivity, accompanied by spectacular dance numbers.

A classic comedy that moves and touches the viewer with a beautiful love story, at the same time that it takes them back in time to discover the beginnings of sound cinema and all its secrets. The story unfolds between iconic and spectacular scenes, choreographies and songs.

A script by Betty Comden and Adolph Green full of humor and love, a plot accompanied by spectacular dance numbers and a fun and sensitive tone, make the musical an ideal comedy to watch as a couple, family or in a group. Suitable for all ages.
Perfect and a must have for all fans of the golden age of musicals!

*Ticket sales for “Singing in the Rain” 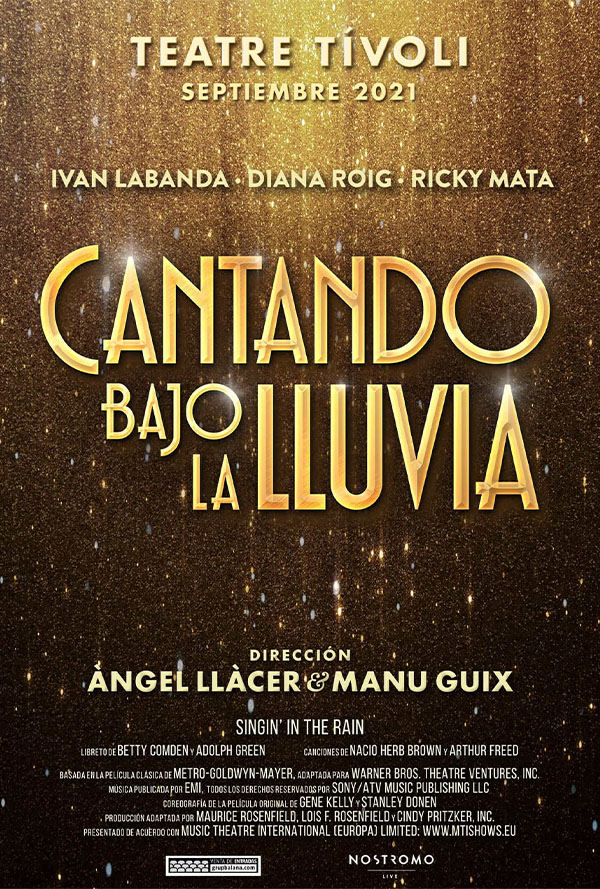 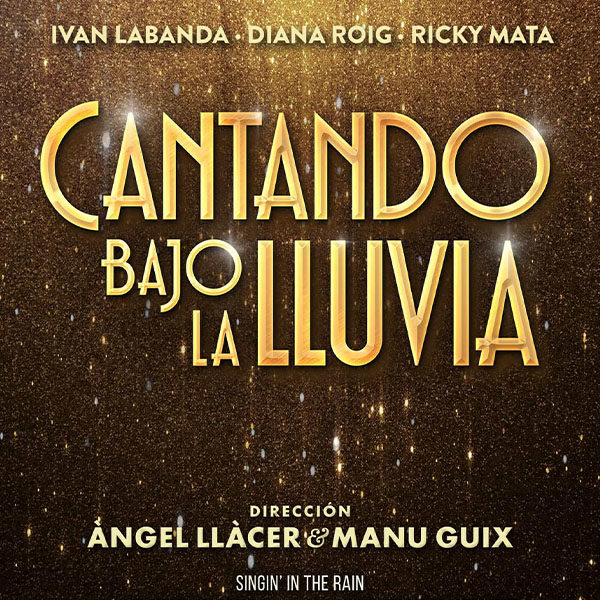 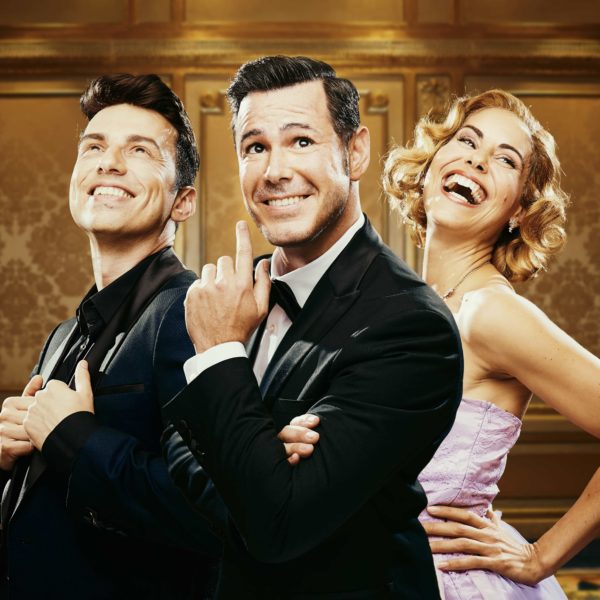 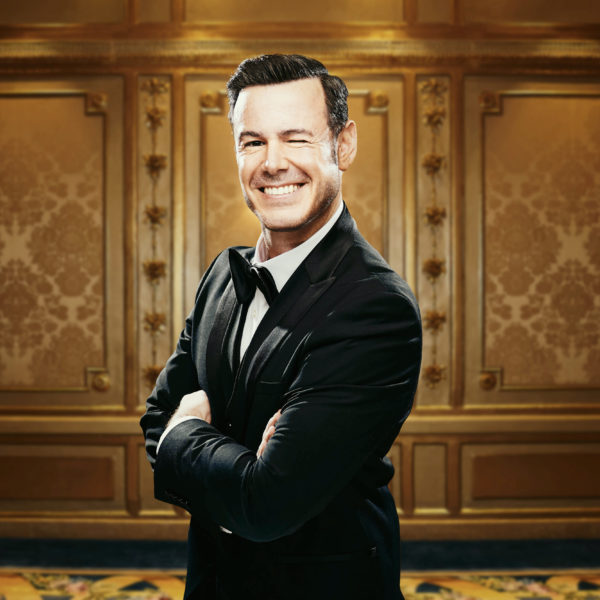 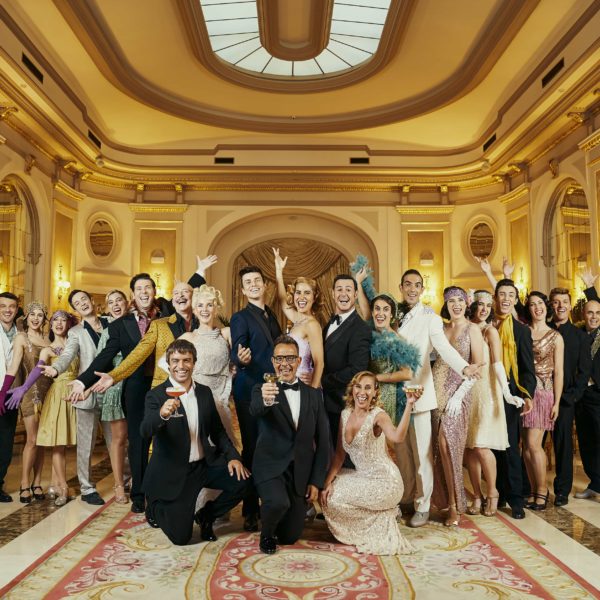 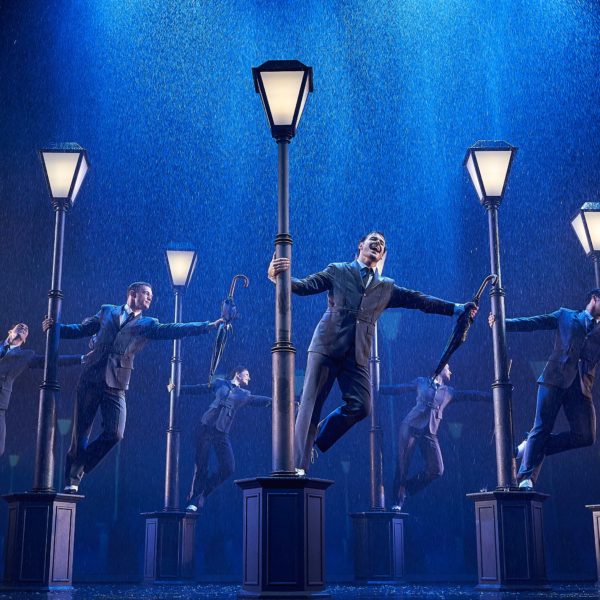 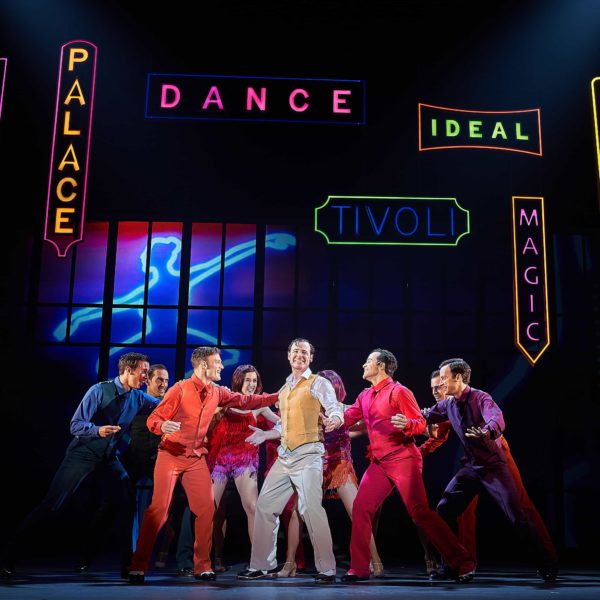 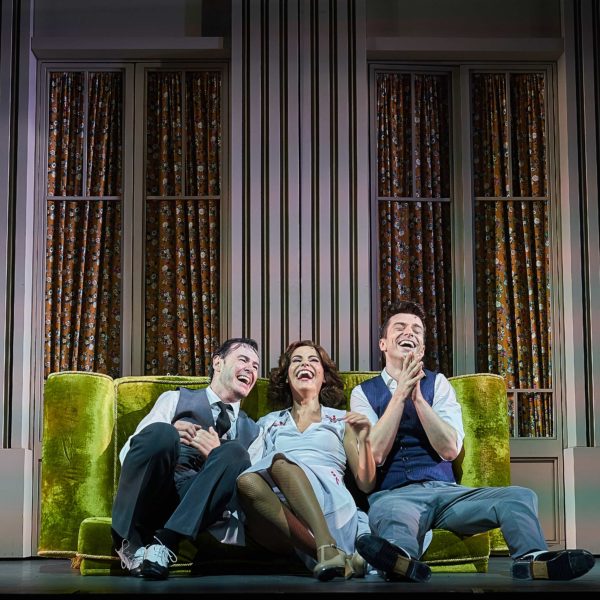 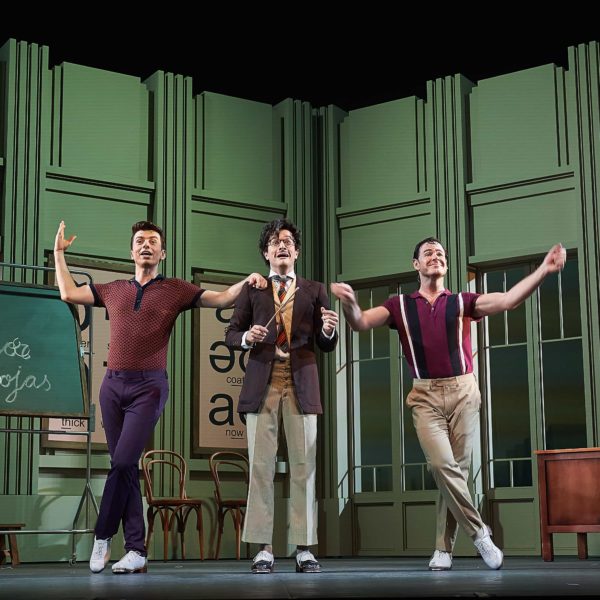 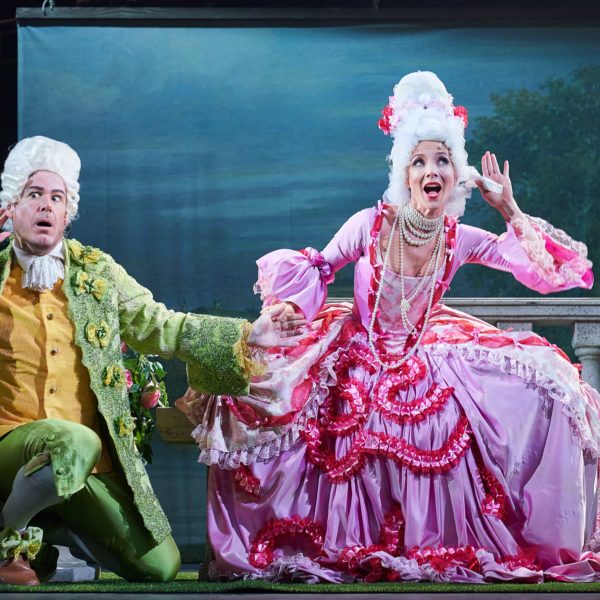 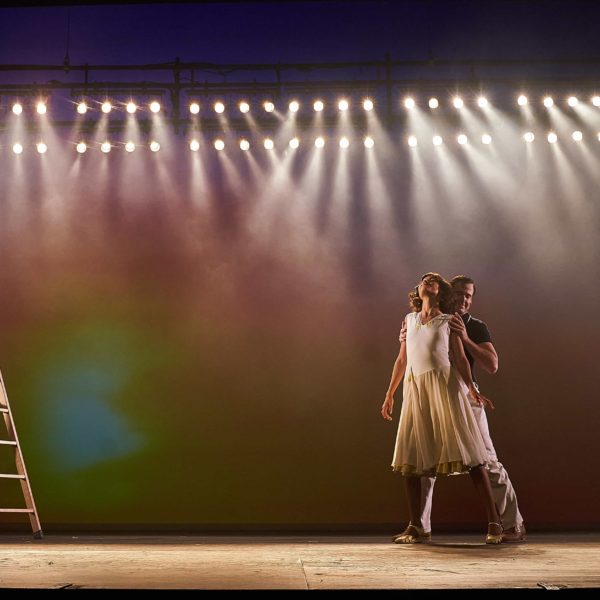 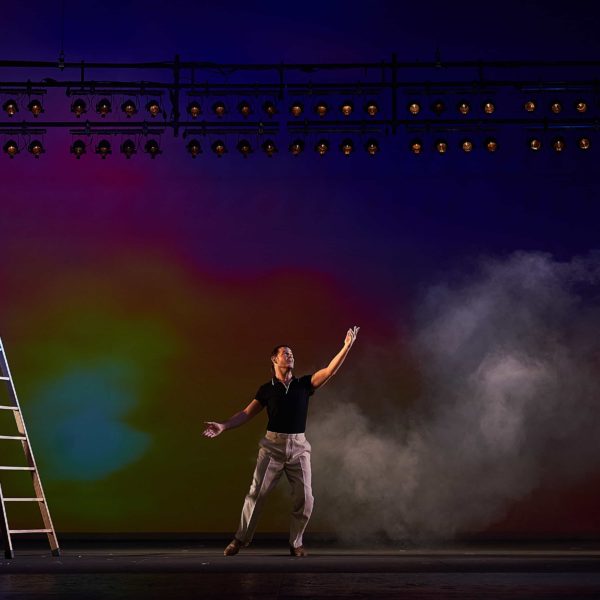 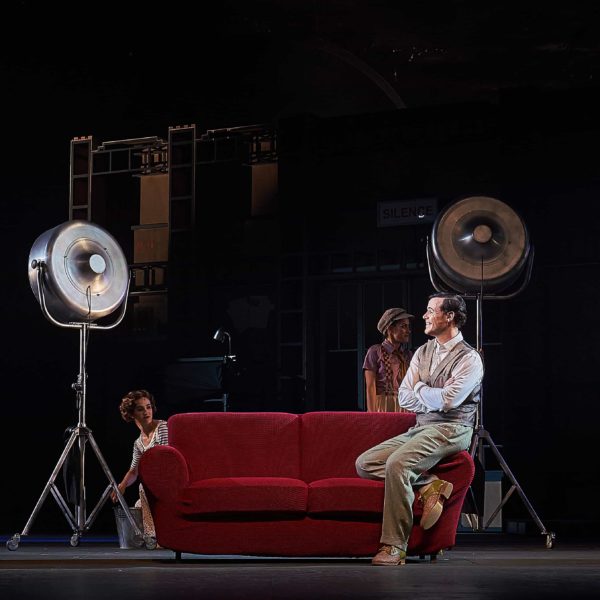 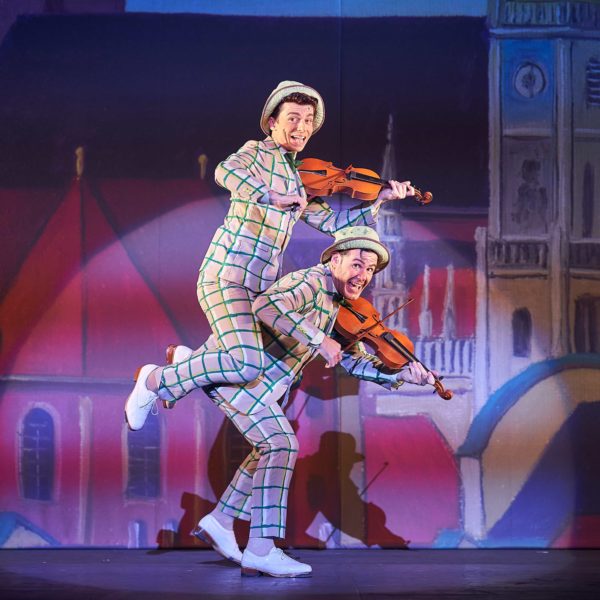 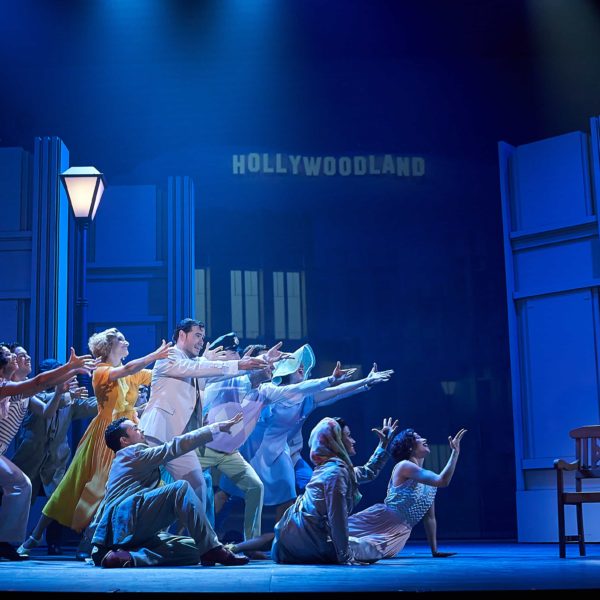 “Ivan Labanda perfectly captures the tone and energy of a Technicolor heartthrob, and thus his leading man Don Lockwood stretches his optimism throughout the performance.”

“In the movie, like now in the theater, in ‘Singing in the rain’ everything invites you to soak up escape”.

‘Singing in the rain’, a successful musical downpour at Barcelona’s Tívoli.”

“Ivan Labanda embodies Don Lockwood in a production in which the echo of Gene Kelly resounds to the rhythm of jazz and tap… and he does it in a big way, with one of those montages that are called to turn the billboard upside down.”

“With Ivan Labanda, Diana Roig and Ricky Mata as the leading trio; the musical promises a refreshingly glamorous spectacle.”

“The chemistry of the trio on stage is overwhelming with indisputable poise in singing and dancing. It is noted that the three protagonists have been preparing the choreography for the musical for some time and training in the different disciplines that occupy it. The pose of the body, the security… they give us a sublime interpretation as a result.”

Special chapter deserves Ivan Labanda, who is present in almost all numbers dancing and singing. His effort is highly appreciated considering that Kelly shot them for months and he only has a couple of hours and a half to execute them all with great precision in a montage that lives up to what is expected on the big stages.”

“Ivan Labanda brings Don Lockwood to life. Difficult task: to play a character brought to life by one of the best dancers of all time. Labanda’s interpretive skills are excellent and her singing voice makes you fall in love. Dancing, you have to recognize the incredible effort you must have made to live up to those beautiful choreographies. He has studied the movements of Gene Kelly and his elegance when moving, and he has managed to capture it. The number ‘Singin’ in the Rain’ is spectacular.”

“A spectacular production with a luxury cast. All the main actors give absolutely everything on stage and the result is excellent.”

“Singing in the rain” is, in our opinion, a magnificent production that no one should miss. It exudes optimism, live music, dance numbers choreographed to the millimeter and magnificent performances. “

“A magnificent downpour of songs. The Tivoli is flooded with applause at the premiere of the theatrical version of the mythical film.”

“The public that fills the stalls and the Tivoli amphitheater gives its approval with a note, applauding standing at the end of this great show that promises long life.”

“Singing in the rain” fills the Tivoli with passion for classical musicals.”

“Ivan Labanda plays Don Lockwood. Hard challenge, because the shadow of Gene Kelly weighs like a slab: Labanda, who takes the character to his field and complies with discipline, craft and great enthusiasm, comes out more than graceful singing and dancing, under a spectacular rain.

“One of the most successful musicals on the current theatrical billboard.”

“…The tandem made up of the two male actors stands out above the rest: Ivan Labanda and Ricky Mata. A comic duo whose voices blend perfectly, with excellent coordination when executing the jazz and tap ballet numbers.”

“Storm of dancing and laughter at Tivoli.”

“An enthusiastic audience acclaims Ivan Labanda in the famous number of the rain: The success of a song that when you leave the show you can not stop singing. It is the yolk of the egg of the show and an Ivan Labanda as smiling as Kelly himself and with good voice gets the biggest applause of the show.”

“We can only take our hats off to Gene Kelly for this magnificent show. Singing in the rain exudes spectacularity, good taste, and a very good performance that is transferred to the public in the form of good vibrations, enjoyment and humor”.

“Ivan Labanda plays Don Lockwood, the role he played in the movie Gene Kelly and with this it was not easy for him to come out of this challenge in which he has to sing and dance at the same time. Labanda moves across the stage with the required grace and ease.”

“The iconic scene of the film is spectacularly resolved. A complex and highly technical display that looks like a top ten in the entire scene to the public, not only for the technical and visual part, but also for the dedicated Ivan Labanda.”

“Actor, singer and now dancer Ivan Labanda stars as Don Lockwood. Her best-known song and dance number from both the film and the musical will be long remembered.”

“A musical that will make history.”

“Two hours of musical fun guaranteed, a good script, a good adaptation, a good performance, a very fitted dance and moments of humor […] In short, one of the most grateful musicals that the harvest of the season has given so far. “

“Labanda’s elegance: We already knew that Ivan Labanda is a great singer and a great actor. What we didn’t know is that Labanda is an excellent dancer.”

“Labanda and Roig dance and sing in very demanding musical numbers with a timing and chemistry that make the viewer believe that they have worked together all their lives. A shower of emotions.”

“Hundreds of deafening applause eclipsed the sound of rain in the recreation of one of the most famous scenes in the history of cinema, which Ivan Labanda defends with impeccable mastery.”

“An acting job that makes what is not easy.”

“The public surrendered to a show that made them laugh, applaud and move.”

“Humour, love and very good casting: a successful trio. The actors in this musical convey these important and characteristic elements of the original work: they are dancers, singers and performers.”

“The public surrendered to a show that made them laugh, applaud and move.”

“Ivan Labanda has a plant and sings with style. A protagonist protected from the memory of Gene Kelly. ”

“An absolutely recommendable show to spend two and a half hours of intense fun and where you practically leave the theater dancing and singing.”

“The musical of the season in Barcelona.”

“Infarct choreographies, great sets, a text that works and that brings out more than one smile. Ivan Labanda, Diana Roig and Ricky Mata: a leading trio that eats up the show with their performances, voices and charisma.”

“Singin’ in the Rain” denotes great respect for the original film and for Gene Kelly. Ivan Labanda takes on the role of Don Lockwood, mimicking the movements of the original actor… And how well he does it!”

“The scene that gives title to the show is a fantasy for the senses: Ivan Labanda singing and dancing under a real rain. Seeing him dancing like that under the water, recalling the famous scene of the film and that, in reality, it is an icon of the cinema, transmits an enormous happiness. “ 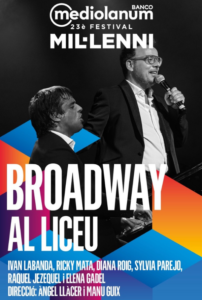 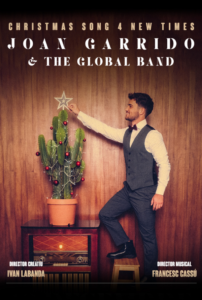